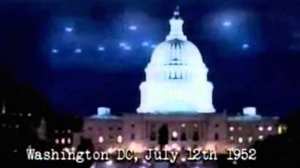 Washington DC, July 19-20, and July 26-27, 1952 … On July 19 at 11:40 p.m. Edward Nugent, an air traffic controller at the Washington National Airport (today it’s called Ronald Reagan National Airport) spotted seven blips on his radar. They were located fifteen miles south by southwest of Washington DC where no known aircraft was.  He realized the objects were not following established flight paths.

“We knew immediately that a very strange situation existed … their movements were completely radical compared to those of ordinary aircraft,” stated Harry Barnes, senior air traffic controller at the Washington National Airport.

Shortly afterward, other objects began appearing on the radar scope in all sectors. Barnes contacted Edwards Air Force Base when the objects were over the White House and the Capitol. The base reported no unusual activities on their radar, but soon airmen on the base and in the tower spotted an “object which appeared to be like an orange ball of fire, trailing a tail.”

A DC-4 pilot for Capital Airlines, S. C. Pierman, was waiting for permission for takeoff when he spotted what he believed to be a meteor. The tower informed him that radar had picked up an unknown object closing in on his position. Over a fourteen-minute period, Pierman observed six objects— “white, tailless, fast-moving lights.” Pierman was in radio contact with Barnes the entire time. Barnes noted, “Each sighting coincided with a pip we could see near his plane. When he reported that the light streaked off at a high speed, it disappeared on our scope.”

Meanwhile, control tower personnel at Edwards Air Force Base were tracking unknown objects on their radar. Staff Sgt. Charles Davenport noticed an orange-red light to the south; the light “would appear to stand still, then make an abrupt change in direction and altitude…this happened several times.”

At one point, Andrews and National radar centers were tracking an object hovering over a radio beacon. The object vanished from all radar screens simultaneously.

New Castle Air Force Base in Delaware scrambled jet fighters. The jets arrived over Washington at three a.m.—but before they arrived, all the objects vanished from radar. The objects later return after the jets ran low on fuel and returned to base. Barnes was convinced that “the UFOs were monitoring radio traffic and behaving accordingly.” At 5:30 a.m., around sunrise, the objects again disappeared from the radar scopes. A civilian radio engineer in the suburbs of Washington, E. W. Chambers, observed, “Five huge discs circling in a loose formation. They tilted upward and left on a steep ascent.”

July 26, 1952, Saturday at 8:15 p.m.… Aboard a National Airlines flight to Washington, a pilot and stewardess spotted strange lights above their plane. Within minutes, both radar centers at Edwards Air Force Base and the National Airport were tracking more unknown objects. A master sergeant at the base stated, “These lights did not have the characteristics of shooting stars. There was (sic) no trails… they traveled faster than any shooting star I have ever seen.”

By 9:30 p.m., radar centers at Andrews were again picking up unknown objects in all sectors. They were described as sometimes traveling slowly, and other times they reversed direction, moving across the scopes at an estimated speed of 7,000 miles per hour. Two Air Force fighter jets from New Castle Air Force Base in Delaware arrived over Washington by 11:30 p.m. They were directed toward the radar blips, but the flight leader saw nothing. However, his wingman did see four white “glows” and chased after them. The “glows” suddenly turned and sped to surround his fighter. He asked the control tower at National what he should do, and the answer was “stunned silence.” Soon the four “glows” sped away from the jet and disappeared.

Throughout the night, people on the ground and pilots in the sky continued to witness the objects and tracked on radar until sunrise when the UFOs disappeared.

Because of the sightings and President Harry Truman’s concerns over the incidents, the United State Air Force issued a ‘shoot down’ order. “The jet pilots are, and have been, under orders to investigate unidentified objects and to shoot them down if they can’t talk them down.”

This site uses Akismet to reduce spam. Learn how your comment data is processed.